Rid Hershel (リッド・ハーシェル Riddo Haasheru) is the main protagonist of Tales of Eternia. Rid is a hunter from the far away village of Rasheans who's only goal in life is to live in peace and eat lots of delicious food. His simple life was suddenly disrupted when Rid and his childhood friend made a fateful encounter with a "Celestian" and embarked on a journey which would eventually save the world from the evil machinations of Shizel and the god of destruction, Nereid.

Rid is a swordsman that particularly excels in using one-handed swords. His self-taught genius swordplay, which impressed even a dojo master and Race, consists of swift and strong attacks which can easily disable enemies and corner them against a wall. Rid also possesses Fibrill, the power of the gods, which allows him to use powerful Divine Aurora Artes that can deal devastating damage and counter certain attacks.

Rid Hershel is also a playable character in the original ACS. 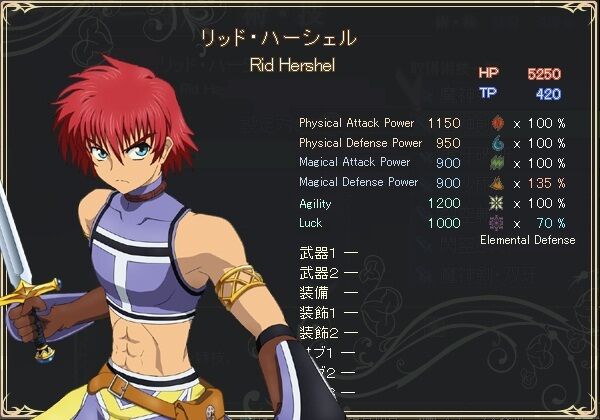 Rid Hershel has no Cut-ins.