Yuri Lowell (ユーリ・ローウェル Yuuri Rooueru) is a 21-year old (22 during the end of Vesperia's PS3 version) swordsman and the main protagonist of Tales of Vesperia. He grew up on the Lower Quarter of the Capital, Zaphias.

Yuri comes across as sarcastic and cynical, possibly due to the way the nobility treated the people of the Lower Quarter. He is the first character to be truly ambidextrous, and performs most of his combat techniques with combinations of both his hands.

Yuri's Combat Style is like an acrobatic fighting style, he usually throws his sword after each swing. He also punches with his right hand (wearing gauntlets). His last name is also in old French: "Lowell" means "Young Wolf", which may explain most of his "wolf"-themed attacks.

Yuri also appears as a support character for Flynn Scifo and assist him in using a Mystic Arte as enumerated below. 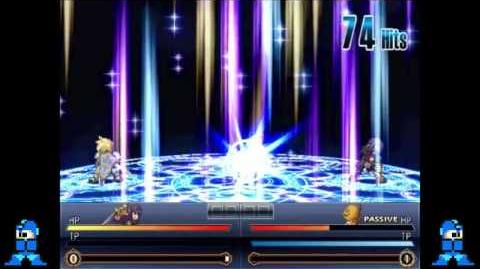 Unlike most characters, Yuri has 6 Story Modes, ranking from Easy to Chaos. Modes after Hard feature opponents that come one after another, meaning that the fields, positions, and statistics of your character will not reset once an opponent has been defeated. However, a little amount of HP is refunded whenever an opponent is defeated in Mania.

In ACS, Yuri, and his cameo support character Flynn Scifo, has six cut-ins.

As a cameo support character for Flynn Scifo, Yuri has three cut-ins.

Flynn and Yuri's first optional cut-in for Boushin Soutenha. Press down to show.